During a recent migration from Exchange 2007 to Exchange 2013, we ran into an issue that I was unaware of. Outlook 2013 was popping up multiple times per day with the following message:


The Microsoft Exchange administrator has mad a change that requires you to quit and restart Outlook.

This issue seems to be specific to Outlook 2013 and Exchange 2013 CU5. I have not applied CU6 because there are known compatibility issues with Exchange 2007 coexistence for ActiveSync.


For more information about this issue, see:
UPDATE: We were also running into a strange issue with Outlook 2007 where clients would connect and be able to send messages immediately but not send for a few minutes. That issue was also resolved by removing the reference to the old public folder database.

Posted by Byron Wright at 2:17 PM No comments:

We had a client get infected with a virus today that used Outlook for sending messages out. This was unusual. Most viruses attempt to deliver email themselves and can be blocked by the firewall. Because this virus used Outlook, the messages were sent through the Exchange server which is allowed to deliver email to the Internet.

Three specific users got infected and I wanted to be able to inform those that were sent messages not to open them. I could get this information from the message tracking log based on the subject of the message. I used three commands to dump the information to a text file.

First, get the list of messages sent by a specific user:


I then provided the text file to each user to inform the necessary recipients.


Posted by Byron Wright at 1:35 PM No comments:

Removing a Message from All Mailboxes

This morning a client got a virus infected email message that got sent to all users. Only 3 users opened the infected attachment initially, but I didn't want to count on users to delete the message manually. The risk of one forgetting and opening the attachment was too high.

In this case the virus was in an attachment named document2174_pdf.zip. This filename was unique enough that I was comfortable searching for all instances of that attachment and deleting the messages. If the filename was more generic, I would have included the message subject in the query.

Before you can perform this type of search, your user account must be a member of the Discovery Management group. This is required to do multi-mailbox search. Group membership does not take effect immediately, you may need to close and reopen your Exchange Management Shell prompt.

The syntax I used to delete all messages with the specific attachment from all mailboxes was:

Note: This deletes the entire message, not just the attachment.

Posted by Byron Wright at 1:25 PM No comments:

A few weeks ago, a client reported that when sending to a list of email addresses, one of the recipients was not getting the attachment. The recipient got the email message, but not the attachment. So, then you start to work it through logically:
Of course it's always someone's fault, and it this case, I'm blaming Outlook. This turned out to be a new problem I've never seen with rich text formatting (RTF).

I'm sure that everyone that supports Outlook has at one time or another run into the winmail.dat attachment problem when Outlook sends RTF formatted email to a client that doesn't understand it. In this case, the client receiving the email partially understood RTF. It understood it enough to get the text message out, but not the attachment. The whole message was being delivered, but the client software dropped the attachment.

Outlook allows you to define on a per contact basis what formatting will be used when sending a message to a recipient. I'm yet to find a user that sets this on purpose, but in this case, it was accidentally set for RTF.

Rather than trying to fix this at the Outlook level and to ensure that it never happens again, I've disable RTF at the Exchange server level. If the client sends an RTF formatted message, Exchange will change it to HTML which is much more widely supported.

In Exchange Server, you can set how RTF format is used per domain. By default, there is a single domain in Organization Configuration > Hub Transport > Remote Domains, named Default. On the Message Format tab for this domain, under Exchange rich-text format, select Never Use. After doing this attachments were delivered correctly.

Posted by Byron Wright at 10:41 AM No comments:

Posted by Byron Wright at 1:27 PM No comments:

As we implemented Exchange 2013, the journaling mailbox was filled with messages generated by Managed Availability. The messages were from inboundproxy@contoso.com with a subject of Inbound proxy probe to a health mailbox.

Managed Availability was sending messages through the transport system to health mailboxes to verify that the system was functioning normally. However, this was resulting in a lot of messages that were not required being journaled. To avoid this, there are two options:
I'm always reluctant to disable basic functionality in the system. So, our first attempt was by using a journaling rule with a dynamic distribution group for all users. When we did this we found that it was not reliably journaling the messages. So, we abandoned the journaling rule option and chose to disable the monitors generating the email messages instead.

In a knowledgebase article, Microsoft provides the following three commands for disabling the messages:

Note:
In these commands, you must provide the -ApplyVersion parameter which specifies which version of Exchange Server that the override applies to. When you apply new updates to your system, you must run these commands again.

To identify the version of Exchange you are running, you can use the following command:

After creating an override for each instance of OnPremisesInboundProxy, all of the Inbound Proxy Probe messages were disabled.

iDRAC7 - No Mouse or Keyboard

We recently had an emergency issue with a client system and had issues with the iDRAC7 remote control features. We put iDRAC cards in all of our servers for exactly this scenario where there is an unknown issue and we might need to power cycle the system.

We were able to log into the iDRAC7 web console with no issues. However, on the summary screen it was not showing status for the power supplies. Also, if I tried to browse the disk status, it was indicating the no disks or controllers could be seen.

Fortunately, the fix was pretty easy. Just restart the iDRAC card. To do this, on the Summary screen, in the Quick Launch Tasks, click Reset iDRAC as shown below. This does not reset the configuration of the iDRAC, it just restarts the card. 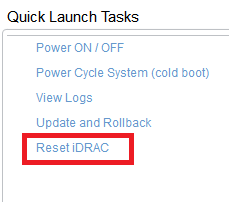 Posted by Byron Wright at 11:43 AM No comments:

We have one client that works with an insurance company. In order to ensure that data is secure, they request that their customers force the use TLS instead of relying on opportunistic TLS. This is more secure because the messages will wait in the queue if TLS cannot be established.

To use TLS for inbound messages, you need to have a valid certificate installed on your Exchange server and have assigned the SMTP service to that certificate. That certificate needs to include the name that external servers use to reach your server, such as mail.conexion.ca. As long as Transport Layer Security is enabled as an authentication mechanism on the Receive connector, opportunistic TLS is used for inbound messages.

You can also force TLS for a receive connector, however, those are based on IP address. If the sender changes the IP address, then TLS will not longer be required. So, in most cases opportunistic TLS is a better choice for inbound messages.

Note: If you have another proxying device like an antispam appliance between Exchange and the Internet then you need to setup encryption on that device rather than your Exchange server.
Posted by Byron Wright at 2:47 PM No comments: