On my laptop, I run Windows 10 Pro Insider Preview current build 17692.1000. I am guessing that my OneDrive issue was related to that. It seemed to happen after a recent update, but I'm not 100% sure.

Here were my symptoms:
Looking back at the laptop, I could see:
Some random searching came up with:
However, at this point, in %LocalAppData%\Microsoft\OneDrive, I saw there was a file OneDriveStandaloneUpdater.exe. I tried running that with no fix.

I browsed around a bit more and found OneDriveSetup.exe in the %LocalAppData%\Microsoft\OneDrive\Update folder. I ran this file and I got the dialog box indicating that OneDrive was being prepared for first use. When it completed, it kept the settings for both my personal and OneDrive for Business. The only hiccup was that the file I was working on over the last two days was listed as a conflict that I needed to resolve.

As much as this annoyed me, I think this shows how much better the OneDrive client is than it used to be. Not that long ago, almost any syncing problem was fixed by resyncing and downloading all of the data again. This properly recognized and retained a few GB of data only having an issue with the file that was modified while OneDrive wasn't running. That's pretty good.

Update June 26, 2018
Well this happened again, and I found an event log error that looks like the setup file for OneDrive was trying to run and failed. I was able to find this error for today and the previous event where it failed. Both were event ID 1001 which is pretty generic. The P5 value was different on the previous error. 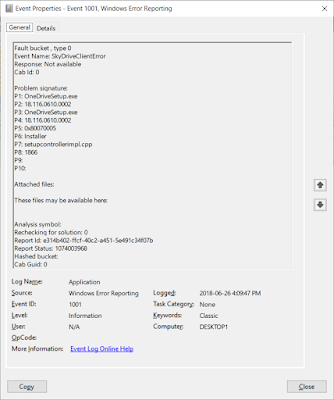 I was able to confirm that running OneDriveSetup.exe alone was enough to fix the issue.
Posted by Byron Wright at 3:36 PM No comments: