Microsoft is having a certificate trust issue today for Firefox when accessing Office 365 services. I haven't bothered digging into the details, but it's something to do with trust checking by using OCSP (Online Certificate Status Protocol).

The error you see is "SEC_ERROR_OCSP_INVALID_SIGNING_CERT" and looks like this:

Other browsers are not affected. So, you work around this by using Chrome, IE, or Edge.

If you prefer to continue using Firefox, you can modify the setting for certificate verification with the following steps:
Given that other browsers don't use this type of security, it's fairly safe to disable.
Posted by Byron Wright at 10:59 AM No comments:

Email ThisBlogThis!Share to TwitterShare to FacebookShare to Pinterest
Labels: O365

Everyone Dynamic Group with Office 365 Hybrid

Many organizations have configured a dynamic distribution group that includes all users with mailboxes. This Everyone group is used for sending out company notifications and the like. Because this group is dynamic, it's automatically updated as new mailboxes are added and removed.

One way to fix this is to modify the dynamic distribution group to include MailUser recipients. The screenshot below has enabled Users with external e-mail addresses. 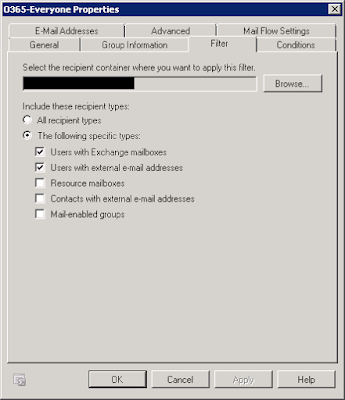 This will include users with cloud mailboxes. This is the recipient filter for the dynamic distribution group:

Note that everything after the two recipient types is added automatically when you set the filter. So, don't include that information when you set a filter. If you do, those requirements will be in there twice.


Posted by Byron Wright at 9:54 AM No comments:

Removing a Cloud Mailbox from A Synced User

The title for this post is a bit incomplete because there wasn't enough space for a full explanation. Here is the scenario I had...

Finally I moved the user back to an OU that was synchronized. This recreated the cloud user account without a mailbox and the account was identified as having an on-premises mailbox.
Posted by Byron Wright at 4:45 PM No comments:

When you configure hybrid mode, calendar sharing is automatically configured between on-premises and cloud users. You don't need to configure anything. However, in some cases, you may need to perform an IISreset.

On a recent project implementing implementing hybrid mode for an Exchange 2010 organization, we enabled hybrid mode and tested connectivity. Everything looked good for mail flow and mailbox moves. However, free/busy lookups failed from the cloud users to on-premises. When we tried to view the on-premises users' calendars the status was "No Information".

When you're not sure what's going on, it's always a good idea to use the Remote Connectivity Analyzer to test things out. There is an Office 365 tab which includes a Free/Busy test. When I ran this test, it was successful, as shown in the figure below. However it still wasn't working.

It's been a while since I've implemented Hybrid for Exchange 2010. With a quick search, I found this blog post that reminded me that an IIS reset will fix this up:
Most Exchange IIS related issues resolve themselves after a period of time. That period of time might be 12-16 hours, but usually there is some background process that refreshes things.

In this case, hybrid mode had been configured for multiple days. The free/busy lookups required an IISreset or a server reboot to fix.