I have done a lot of work with small and mid-sized wired networks, but I have only worked with single access point wireless networks until recently. The first thing I noticed is that the documentation on configuring wireless networks for multiple access points is poor. So, with the idea of helping others, here is what I’ve figured out.

For the purposes of my examples, I’m assuming that the clients will be accessing the wireless access point (WAP) by using a shared-key (password) and that all users will be using the same key. The use of 802.1x for authentication is beyond the scope of what I’m dealing with.

Vendors use slightly different terminology for the same scenario. I've attempted to use generic terminology that is similart to most vendors.

You can often use just the WAP functionality of a wireless router. However, many of these do not have as many wireless configuration options. If you use a wireless router as a second WAP, be sure that you disable DHCP on the device. Only the internal IP address of the device will need to be configured. 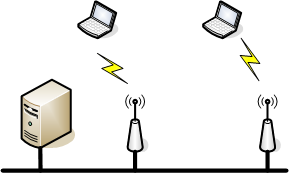 If you have Ethernet ports close to the location that you want each of your WAPs, then this is the simplest scenario. Obtain as many WAPs as you need and place them where required to get coverage. Ideally the signals from the WAPs should not overlap too much. The rule of thumb appears to be 25%. However, you’ll need equipment or software to measure that. Most WAPs have an option to reduce signal strength if required.

All WAPs should be configured with the same SSID (network name) and key but be using different channels. Wireless clients are configured with a single SSID and key. It is the responsibility of the client to select the appropriate WAP based on signal strength. If the client moves while it is connected roaming should occur with very little interruption as the connection changes from one WAP to the next. 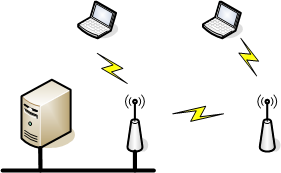 This scenario allows you to extend your wireless network without requiring an Ethernet port for the WAP. The WAP accepts connections from wireless devices and also connects with another WAP that connects back to the main network (typically via Ethernet, but could be wireless). Be aware that network speed is halved in this scenario as half of the network capacity is devoted to clients and half to the other WAP connection.

Some devices support a protocol called Wireless Distribution Service to support this. However, this protocol has many interoperability problems between vendors. So, don’t count on it.

The WAPs should be both be configured with the same SSID and key. The WAP configured as a wireless repeater should not be connected via Ethernet to the main network. If you do connect the wireless repeater to the Ethernet network, you may cause all devices on the network to get duplicate IP address errors. The duplicate address errors in the Windows event log will indicate the MAC address of the WAP.

This mode is used to connect two or more wired networks via a wireless network. For example, two computer labs without a physical wire between them or two offices separated by only a short distance. A computer in one physical location is able to communicate with computers in the other physical location. This could allows you to share an Internet connection or other network resources.

A WAP in bridge mode is connected to each wired network. Each WAP is configured with the same SSID. You also typically have the option to allow wireless clients to connect to each WAP.
Posted by Byron Wright at 3:08 PM No comments: