Forward Messages and Leave in Mailbox

One of the fairly common tasks for Exchange administrators is to configure forwarding on a mailbox. Previous versions of Exchange gave you the option to leave a copy of forwarded messages in the mailbox and the option was accessible in the graphical administration tools. As you can see in the screenshot below, for some reason in Exchange 2013 this option was left out of the graphical/web interface. 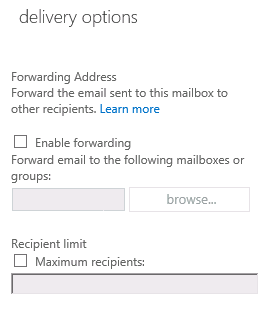 When you enable forwarding in the web interface, by default the message will not be left in the recipient mailbox. However, the option is still there if you use PowerShell.

The Set-Mailbox cmdlet is your friend:


Posted by Byron Wright at 8:29 AM No comments:

I was too busy to attend the Microsoft Exchange Conference this year in Austin. Fortunately for us they recorded most (if not all) of the breakout sessions and made them available on Channel 9. It looks like over 50 session are online and available for free.

You can see them here:

Posted by Byron Wright at 1:07 PM No comments:

Over the last few years, memory has become increasingly inexpensive. As a result, for scalability, you can often see Exchange servers with 64GB or 128GB of RAM.

In the past, Microsoft's guidance on pagefile size has been system memory plus some amount to allow for the contents of memory to be written to disk in the event of a crash. Basically, this is for troubleshooting information. For Exchange 2013, the guidance has been RAM+10MB.

Unfortunately this means that a large amount of disk space is used for that pagefile with little benefit because it's not typically used much. Certainly not the full RAM of the system. I've been arguing for a long time that unless you are troubleshooting bluescreen events with Microsoft support, there is no need for this large of a pagefile for Exchange or regular Windows servers.

As of Exchange 2013 SP1 the new guidance is to max out the pagefile at 32GB+10MB. Apparently Microsoft has been doing this internally for some time.

Posted by Byron Wright at 2:41 PM No comments: