Throwing this one out there in case anyone hits a similar issue. This one confused the heck out of me but was simple in the end.

We have a customer with a Dell T310 server with an H200 RAID adapter. The performance on the H200 is pretty poor. In part because the drive cache is disabled by default. But, search around and you'll see no one has much nice to say about the H200.

To improve performance for this server, we ordered an H700i card from Dell. We ordered from Dell rather than aftermarket to avoid issues with compatibility. And so that it would be supported.

There are several sets of instructions out there for doing this upgrade. Here is the one I thought was the best:
We went through the guide, installed the card, installed drivers, and then went to connect the drive backplane to the card. Uh oh, wrong connector type. 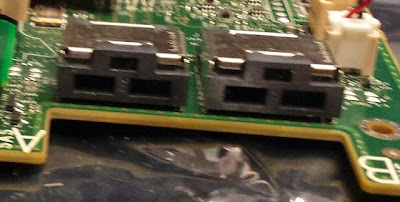 You can see above that the new card has a two prong connector that does not match the mini SAS connector (shown below) of the cables that shipped with the card. The cable already in the server also had this type of connector. 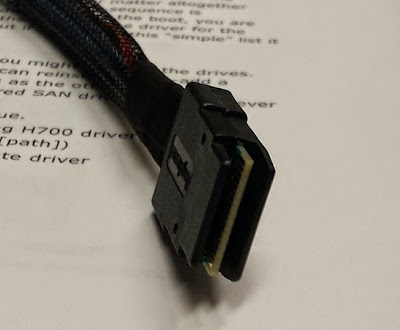 While I'm comfortable with server hardware, I'm by no means an expert on all different connection types. So, at this point I assume that there is a connector type that I'm unaware of and we need either a different card or different cables.

My rep confirmed that this is in fact the correct card. Next step is calling support. I sent the pictures to support and he wasn't sure what was up either. While on the phone as the support rep was searching, I tried searching for SAS connector types and nothing matched what I was seeing on the card. It wasn't making sense. This can't possibly be correct. 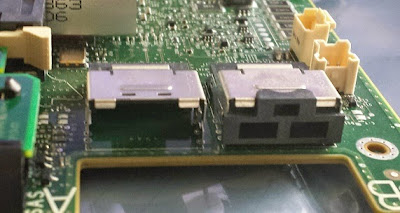 One final note about this card. We ordered the model with 1 GB non-volatile RAM. I assumed that this meant no battery was required. In fact the card uses DRAM for operations because it is faster than NVRAM. The battery is still required to move data from DRAM to NVRAM when a power outage occurs.
Posted by Byron Wright at 11:22 AM No comments:

A brief plug for the latest book writing project that I've completed.

Brian Svidergol and I have completed Virtualizing Desktops and Apps with Windows Server 2012 R2 Inside Out. Here's a quick synopsis of the book.

First, I want to be clear that this book is about planning and implementing virtualization technologies. It's not just an overview.  Much of the content is similar to what's in Microsoft Course 20694 which I was also a co-author on.

The first set of virtualization technologies we explore the details of are for user state virtualization. Basically technologies that support roaming. The newest of these from the Microsoft Desktop Optimization Pack (MDOP) is User ExperienceVirtualization (UE-V). Older technologies like roaming user profiles and credential roaming are also covered.

We also cover Client Hyper-V in this book because some people will use it to run apps in isolation for either testing or compatibility reasons. It also provides a good base of knowledge to understand the virtual machine-based (VM-based) VDI content later in the book.

There are four chapters on implementing and using App-V. This book covers installation, management, and sequencing applications. If you want to learn about using App-V in your organization this is a great resource.

The last five chapters are about implementing Remote Desktop Services (RDS) for virtual desktops. This includes the components you expect for session-based remote desktops with RD Session Hosts (formerly terminal servers), RemoteApp programs, RD Gateway for remote access, RD Connection Broker, and RD Licensing. We cover high availability for all of these components.

Posted by Byron Wright at 4:03 PM No comments:

Free Windows 10 ebook for IT Pro

Microsoft typically releases some free ebooks when new versions of Windows come out. For the most part, they tend to be a high level overview of the new features. So, they won't help you implement much, but they will let you know what's possible.

True to pattern, they have released a new free ebook for Windows 10. You can get it here.

I've downloaded this book, but haven't had a chance to read it yet. I'll update with a synopsis later on.
Posted by Byron Wright at 3:15 PM No comments:

A quick plug for Conexion Networks

You may or may not know that I am a business partner in Conexion Networks. We just updated our web site. So, if you read the blog but have never checked out the company, you can see the new web site here:

Posted by Byron Wright at 10:25 AM No comments:

SSD Drives Not Suitable for Archiving

The big takeaway for me on this is to not use SSD drives as external USB drives. I have an SSD drive in an external enclosure that emulates an optical drive based on ISOs stored on the drive. I use this every once in a while, but could conceivably go for several months without using it. During this extended period without being powered up, it could lose data.

So, if you're archiving data on external drives for an extended period of time make it a traditional spinning disk.

Posted by Byron Wright at 1:58 PM No comments:

Had a client with some odd DNS resolution issues recently. The clients were not using the primary DNS server and they should have been. These pages helped identify why that was:

Posted by Byron Wright at 9:30 AM No comments:

We have a client with a 100Mbps link between sites. They replicate a large mailbox database (600GB) across this link and due to some errors need to reseed the database. The reseed process takes about 13 hours on this link at full speed. Which is long enough that it impacts production activities and can't be done during the week.

Exchange Server 2010 and Exchange Server 2013 do not have any built in mechanism to throttle reseeding of databases. If you do some searching, you'll probably find links recommending that you implement QoS at the network level. Unfortunately in some cases that is difficult to implement.

During the reseeding process, msexchangerepl.exe is responsible for copying the database. So, that's the process we need to limit. I did also some significant activity generated by Microsoft.Exchange.Store.Worker.exe but this was temporary (a few minutes) and there was no need to throttle it.

To limit Exchange reseeding to approximately 50 Mbps I used the following command:


After creating the QoS policy, you can see it take effect in Resource Monitor within a few seconds.

Once the reseed is finished, you can remove the policy by using the following command:


For a little more detail, you can see my previous post on throttling Hyper-V replication:

Posted by Byron Wright at 10:28 AM No comments: