Migration batches are a nice feature introduced in Exchange 2013 for managing mailbox moves. In general they work pretty well, but it can be a bit awkward to work with batches in large organizations. The graphical interface only displays 500 mailboxes at a time and this can be limiting.

To get the batches exactly as you want them, you often end up exporting a list of mailboxes to a CSV file and then cutting that down into batches. You can create a batch by importing a CSV file.

To simplify this process, I've created a script that takes all the mailboxes from a list of source databases and generates the CSV files in batch sizes that you specify. For example, you can use both Admin1DB and Admin2DB as your source databases. If you specify a batch size of 200 mailboxes, then you'll get CSV files with 200 mailboxes except for the final CSV which has the left overs.

The script can also automatically create the migration batches if you turn that option on. In the script, you can specify one or more destination mailbox databases for the moves.

The script does not specify an archive database. If your users have archive mailboxes, then you'll need to edit the migration batches after creation and specify the correct databases for the archive mailboxes.

The script is below. I hope you find it useful.

One of the basic tasks you can do to verify Active Directory replication health is to run RepAdmin.exe /ReplSummary. The question becomes, what exactly do the results mean?
If you’re looking for a quick analysis, here it is. With no fails and all largest deltas less than 1 hour, you’re all good. 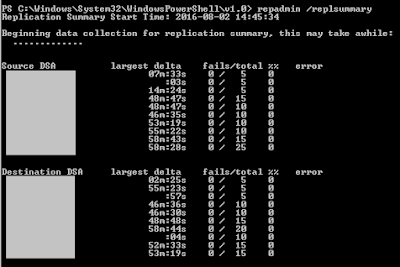 Now, for a more detailed look…

Fails is the number of connections that are not replicating properly. The number of fails should be zero.

Your other thought is likely: How can it take up to an hour for replication to occur?

Within an AD site, all changes are replicated within seconds. However, there are partitions that do not change often. In particular, the schema partition probably changes only every few months. However, even when there are no changes, the connection for a partition will communicate occasionally to verify that it didn’t miss a change notification (polling). The default value for polling within a site is once per hour. That’s where the up to 60 minutes comes from.

You can change the time limit for polling within a site to twice per hour or four times per hour. That will reduce largest delta value, but it won’t really make a difference in the replication of changed AD data. You’re just triggering that polling to happen more often. And, almost all of the time, polling doesn’t trigger any data replication because replication notifications within the site would have already triggered it.

If you do want to change this value, it’s done in the Schedule for the NTDS Settings object in the AD site. It can also be modified for each connection individually, but it’s preferred to do it at the site level.

I'm working on some Active Directory (AD) disaster recovery projects right now and one of the recovery methods we're implementing is AD snapshots. With AD snapshots, you have a copy of your AD data to identify and recover from accidental changes.

The client I'm working with has Windows 2008 R2 with PowerShell 2.0 for their domain controllers. PowerShell is my preferred method for automating anything at this point but AD snapshots don't have any PowerShell cmdlets.

Fortunately Ashley McGlone, a Microsoft PFE, has created some PowerShell functions that help you manage and use AD snapshots. One of the coolest things in there is a function (Repair-ADAttribute) that lets you pull attributes from the snapshot and apply them to the same object in the production AD. You can read more about these functions and download them from these two locations:
The minor issue I ran into is with the Mount-ADDatabase function. This function has a -Filter parameter which displays a list AD snapshots and lets you choose which one to mount. In Ashley's function this is done by using Out-GridView with the -OutputMode parameter which requires PowerShell v3. Using Out-GridView is an easy way to allow the user to select the snapshot. I wish it worked for my servers using PowerShell v2. Here is the line from the function:


For my project, getting all of the DCs upgraded to using PowerShell v3 would take a while. I also didn't want to leave the project in a place where a whole bunch of manual steps were required to mount an AD snapshot older than the previous day. So, let's convert this to a method that works in PowerShell v2.

Now I needed a way to convert a list of snapshots in to a menu. My starting point was a TechNet discussion posting from Grant Ward (Bigteddy). You can view his solution for a discussion here:
Using that example I created the following code:


This code takes the list of snapshots in the variable $snaps and does two things:
After the menu is displayed on the screen and the user selects an option (the $ans variable), the option is used to place the snapshot name into the $Choice variable for further processing. Now we have a version that works in PowerShell v2.

Posted by Byron Wright at 9:08 AM No comments:

Finding the User or Group Name from a SID

I'm working on project where we needed to set AD security permissions in a test environment based on the permission based on production. When I generated a report of AD permissions that had been applied, several of the entries came back with SID numbers instead of user or group names. Typically this means that the user or group has been deleted, but I wanted to confirm.

I wanted to take the SID and identify the user or group account that was associated with it. After a quick search I found a few examples that looked similar to this:

Above example taken from: https://technet.microsoft.com/en-us/library/ff730940.aspx

It seemed to me that there had to be an easier way using the ActiveDirectory module for PowerShell which isn't used by these examples. Good news, there is!

You can't use Get-ADUser or Get-ADGroup to identify the SID name because it could be either one. However, you can use Get-ADObject:


If the command does not return any results then there is no AD object with that SID.
Posted by Byron Wright at 7:43 PM No comments: