In Exchange 2010 a group owner/manager is modified by using Set-DistributionGroup with the ManagedBy parameter. You can also configure this parameter in the Exchange Management Console in the properties of the group. Only users can be listed here, not groups. However, you can add multiple users.

In the Exchange Management Shell, you allow multiple managers of a distribution list by including them as a comma separated list as shown below:


However, it becomes a bit more complicated if you want to add a new person as a group manager. Overall, you need to obtain the list of current managers in a variable, add the new user, and then set the ManagedBy parameter using the entire array. If you specific just a single user then the existing list is overwritten. Let's take a look at the process. 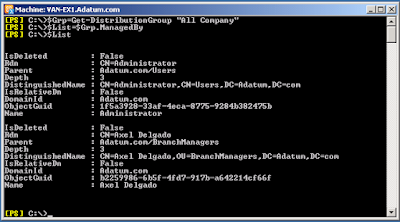 
If you display the contents of the $List variable, you can see that Anna has been added. The object is different from the original two objects, but it is similar enough for the Set-DistributionGroup cmdlet to accept it. 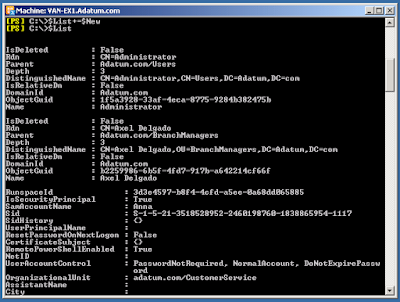 Finally, we can set the ManagedBy for the group:


I should also note that while there is no built in functionality for a security group to manage a distribution list, you can fake it by using these instructions provided by the Exchange Team at http://blogs.technet.com/b/exchange/archive/2011/05/04/how-to-manage-groups-with-groups-in-exchange-2010.aspx.
Posted by Byron Wright at 2:23 PM

Email ThisBlogThis!Share to TwitterShare to FacebookShare to Pinterest
Labels: PowerShell